“Christ at the Checkpoint 4:

The Gospel in the Face of Religious Extremism”

– What would Christ say and do if he were to stand in front of a checkpoint today?

I must admit that I was expecting to find some of the messages from this conference difficult. Instead, I found myself chatting to mainly Americans about what it meant to be Evangelical an

d some said they no longer knew what it meant themselves. So I felt much more at home than expected.

There was a very good introduction to the theme on the first evening,

which is really summed up by these

During the morning of the first full day a lot of time was spent looking at Islam in a realistic way. It was pointed out that it is neither a violent nor peaceful religion in exactly the same way that both Judaism and Christianity are neither an

d both. We need to be realistic and open. The media is very selective and our judgement is based on less than 1% of the Muslim population. There are many texts that ar

e similar between Islam and Christianity. 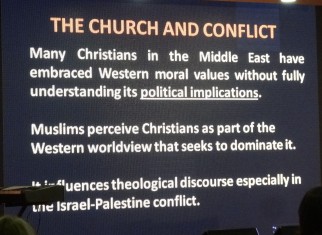 clusively to the Jews, even as written by Jews in the Bible. – Look at the
genealogy of Jesus which includes non Jews

Democracy on its own is not enough in any country, because it can just become the tyranny of the majority. It needs a bill of rights to go with it as well as a system of accountability. The Egyptian democracy failed for that reason as it has in other places. Where the Christian West has tried to impose democracy on countries, such a tyranny has sadly often been the outcome. It was acknowledged that many of the problems in  the Middle East have been caused by Christians – Bush and Blair to name but two.

The biggest failure of Christians is to be provoked into violence. It is much tougher to restrain from violence. If you fight back you are preaching the gospel of ISIS or Boko Haram. We must not use the same weapons as the enemy. You cannot fight for humanity by dehumanizing the other. We need to bring down all the walls and build bridges instead.
A log in our own eye is what blinds us to the other and fear is such a log. We need a strategy of pre-emptive love! We cannot bomb our way to peace. etc.

OK, I know, it is a tough and some would say unrealistic message, BUT if you think that most of those at the conference were from the USA and they are studying and tackling Christian extremism in the USA, then it is all hopeful, even if it is a very long term strategy. We may not be able to reach those already in ISIS, but we can reach out to ordinary Muslims and their children and show them acceptance and love rather than prejudice and violence 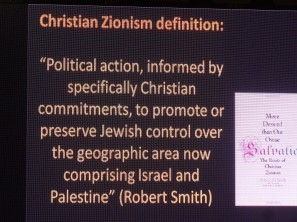 One of the important messages from the conference is that Christianity should NEVER be forced on anyone. It is inclusive and should be shared, but only as an invitation, not as a command. I liked that.

It was wonderful to have Sami Awad introduce the subject and speak on it as well as Munther Isaac who was superb.

Christian Zionism appears to go totally against Jesus’s Gospel message of love and inclusivity and has the effect of making the Palestinian Christians little more than an irritation or ignores them entirely along with the rest of the Palestinian population.

One slide asks if Jews have a divine right to inhabit Israel, which conveniently forgets that it was and st

ill is, partly at least, Palestine. The Balfour Declaration was
mentioned, of course, and the fact that Balfour had no intention of consulting the Palestinians, but just wanted to impose the consequences of Zionism on them.

In the afternoon we went on a field trip to Jerusalem. Although I have heard much of it before and seen the various sites, I always learn something new. We were led by a member of the Israeli human rights group called Ta’aush -http://www.taayush.org/ (Israelis & Palestinians striving together to end the Israeli occupation and to achieve full civil equality through daily non-violent direct-action.) I asked about Ezra, who has been treated very badly by Israel and was told that he is recovering from a slight stroke after his time in the Israeli jail. I remember herding sheep across the South Hebron Hills with Ezra and Ta’ayush when I served as an EA. A great man and part of a brave organisation.

This was followed, the next day, by a study of Jewish extremism. Rabbi Arik Ascherman of Rabbis for Human Rights was one of the speakers. Another great man who has also seen the inside of too many Israeli jails.

Rabbi Ascherman told us that too many hide behind faith traditions while forgetting about context, culture etc. There are times in the Torah where God commands violence, but the commanded person is against it and is proved right. In those cases God accepts that and commends it. ( I would be interested in this aspect of the Torah to be more elaborated)

Arik explained that: Yes, God promised the land, but Jewish behaviour have expanded and contracted what that means. The very things needed to hold onto the land are the very things that make the Jews unworthy of it. Human life is ultimately more holy than the land.

We all see ourselves as victims and the difference between victim and victimiser is ‘a hair’s breath’. Netanyahu is a poor role model as although he condemns individual violence, he practices State violence and that confuses the extremist youth. Judaism is NOT a pacifist religion, but ‘it is a disgrace to hold a sword’. The problem now is that those who feel threatened believe they should get up earlier and kill first, but that is murder.

Israelis need to get out of the box – the mightiest is one who turns enemies into friends. There is no text in Judaism that justifies violence towards the Palestinians. As to Jewish exclusivity, that is ridiculous in the same way that church triumphalism is. Many Jewish scholars have struggled with the ‘chosen’ bit and feel that it is about responsibility and not specialness. Each faith has functions and responsibilities.

That same morning I had had an exhausting breakfast with two Christian Zionists who managed to disagree with each other as well as me! It is always interesting that much higher standard of behaviour are expected from the Palestinians than the Israelis. Palestinians are always expected to condemn those amongst them who express anti-Israeli sentiment and / or violent action, while justifying Israeli rhetoric and violence.
It is strange that Palestinians are collectively condemned whereas Israelis are not. No account is taken of the fact, and it is a rather major one, that it is Israel occupying and demolishing and oppressing and building and not the Palestinians.

As a Jew myself, if we really are the chosen ones, then should not our behaviour reflect that? Israel seems intent on stooping lower than those it accuses of terrorism. Neither people nor St

ate in general are exactly a ‘light’. The Zionists fall into that same mindset.
As said, not a relaxing start to the day!

Also on the last day, after a very good and very full on morning, I went for a walk and ended up at Wi’a

m – the Palestinian Conflict Resolution Centre – http://www.alaslah.org/ – and had a good conversation with Zoughbi Zoughbi who is the Director as well as enjoying several teas and coffees, the most wonderful fresh ripe avocado and cake!

I am glad I came. It has been worthwhile. I am not sure how useful it was, but it has given me extra understanding and refutation arguments for advocacy. I have also met some wonderful people. There was a huge variety of belief among the Christians at the conference. Everything from fundamentalist Creationism to me at the other end of the spectrum! And yes, I would go again, but wonder if I would be allowed to.

I received nearly the full works at Tel Aviv airport. Four interrogations, which began even before I arrived at the terminal. I think that I was given a number on my passport that sent me to a sort of conveyor belt of interrogation and inspection. I believe  it was all because they did not understand why I had not travelled around Israel, but only to East Jerusalem and the West Bank. At one point I explained that in recent years I had travelled around Israel itself and mentioned Nazareth. The man interrogating me looked very disdainful and told that that was also Palestinian and not real Israel. Why did I not visit Tel Aviv and Haifa and other real Israeli places? He went on to demand that I explain why I came to Israel so frequently, when I did not travel to other countries so much. He wanted to know what the draw was. At that point I did what I have never felt it necessary to do before and I told him that I was in fact the daughter of a secular Jew and probably felt the draw because of it! I doubt he found that satisfactory, but did not probe that more fully.

This level of security is new. I am not sure what they were looking for, but at least I felt reasonably confident that my luggage was ‘clean’ as it was not books or paper that interested them, though a small chocolate bar that I had been given that unfortunately had a Palestinian flag on it, caused some problems. I told them they could keep it, but after speaking to a supervisor the women searching me returned it. They also kept scanning my laptop and I hope it has not done it any harm.I really have no idea what they kept scanning for.
Thankfully I got an early breakfast at the hotel and had plenty of time and I knew they did not want me to miss my flight, however, I really did fear a ban on future visits. All my previous strategies failed me on this occasion. I will need to work on new ones for future visits or just tell them the truth and receive an honourable ban!