Hebron a vibrant City with a Centre that has Lost its Heart.

The photo above is of a famous Hebron landmark. The Happy Bunny cafe closed a long time ago, well before 2009 when I spent 3 months in an EAPPI apartment just up the hill from it. It has fond memories for me. Even though a bridal shop is using the premises now, the name and facade remain the same!

This is in area H1 of the huge Palestinian city. It is full of life, with ordinary Palestinians going about their day to day activities of work, education and all the usual things. There is a strike of teachers demanding to be paid properly, but that is, at least, superficially, an internal Palestinian matter. Superficially, because the PA spends huge amounts on security, mostly for Israel, and little for the important things of life such as education. Palestinians are fed up with a government that does nothing for them. They want action.

Hebron is quiet right now.  There are no demonstrations, no tear gas and no, not so, rubber bullets Steel coated with rubber and deadly). There is a daily toll of Palestinian deaths, but they barely get a mention in the news, because, after all, Israel says they are all in self-defence so they don’t matter. The homes of the suspect’s families are demolished and countless children left without homes, or fathers or brothers or even mothers or sisters, but that is OK because they are terrorists attacking a people who are eternal victims, not desperate individuals who just want to be allowed to live in peace, in autonomy on their own land as they choose to live. When Palestinian’s rebel they are seen as the threat and when they remain quiet and try to just get on with their lives the stranglehold gets ever tighter and they live in real fear of suffocation.

The day before yesterday I attended a meeting in the UN building in Hebron. The topic for the discussion was kindergartens in 2 villages in the South Hebron Hill villages and 1 in the Old City of Hebron, which is the central old part under Israeli control with many very unpleasant and violent settlers.

All these children’s facilities are constantly under threat of eviction, settler attack or demolition, not to mention funding issues.  One important person was very late because of an Israeli Flying Checkpoint, which meant a diversion for Palestinian traffic..
So although the meeting is entirely in Arabic and, how I wish I understood much more, it is very interesting to see the agency cogs and wheels in motion and the daily challenges they have. 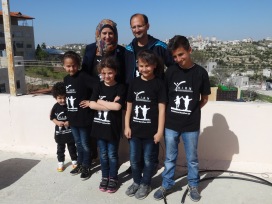 I spent the much of the day helping Hamed prepare his teams for the great Bethlehem marathon on 1st April.

It is going to be a huge affair with money being raised for girls bathrooms in two schools – “We believe that schoolchildren should have adequate facilities which encourage the learning process – even good sanitary facilities are important! These ones need serious rehab!!”
https://www.crowdrise.com/righttomovementpalestine
Please do go to the link and donate

The next day I attended a meeting at the Open University in Yatta near Hebron. It concerned the payment of fees for a particular student.
Hamed is involved with so many wonderful initiatives for helping ordinary Palestinians. University fees, kindergartens, schools, helping to create Master Plans acceptable to Israel, or at least as legal delaying tactics to postpone demolitions, and so much more on top of his day job! He also works with other agencies who provide funds – both international charitable agencies and the local municipality.

He is flying to the UK from Jordan at 2am tomorrow morning, yet still working hard.
In the UK he will do many presentations as well as fundraising activities.

On a sunny day like today, it all looks so beautiful except the constant reminders that Palestinians have little autonomy over their lives or their land and any of the checkpoints we pass can be closed with no warning – closing villages, towns and industrial areas on the whim of Israel. The excuse is always their security and no care is shown for the security, the lives and livings of the Palestinians.

Only this morning Naheel, in whose apartment I am staying, was telling me how she wished she could travel even to Bethlehem in safety and Hamed told me that his family now choose to stay within Hebron for their safety.
I find it very difficult to understand as an international here, why the world seems to have turned its back on ordinary people like these and constantly puts Israel’s god of security above everything and everyone else. 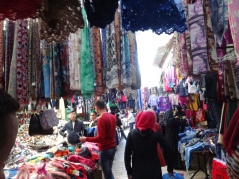 This afternoon I walked into the Old City of Hebron on my own as Hamed had to get ready to leave for Jordan. It was strange how at home I felt. The first part was vibrant and full of market stalls and people, then suddenly there was what seemed like a no-man’s land with just closed shops and silent streets until I reached the H2 checkpoint, where there was some activity again, but very little. The shops here have protection above them from the Israeli settlers who live in the buildings above and throw stones, rubbish and even foul water onto the Palestinians below.

I remember last year I came to Hebron with a group and they were afraid to enter the Old City. As I walked, a couple of men greeted me and actually remembered me from my time as an EA. Others greeted me and said ‘welcome’ in a genuine way and I could not have felt safer. I did ponder about what makes us feel unsafe – experience, propaganda etc.

I went up to the Christian Peacemaker Team apartment and was delighted that 3 of the team were not only there but available for tea and a chat. One of them remembered me as well! Then Zleikha M R Muhtaseb turned up and took me to visit the kindergarten she runs next door and told

me all about her plans to purchase more property and to expand both the kindergarten and literacy and other work she does with local women. She also showed me the work she had already done with the children, clearing debris from the barrier next to the building and creating a play space there.

I went further into the Old City and met Leila from the Woman’s co-operative. She gave me the usual tea, just like old times, except it wasn’t. I think she was the saddest person I met. She looked well enough, but apart from the expected problems with having a shop in the Old City now with very few tourists or passers by, she said that some of the recent killings of Palestinians had just

been suicide. When life has so little to offer and there seems to be no hope, approaching an Israeli soldier with a knife or driving towards soldiers in a suspicious way is a quick and sure way to go. She was so sad.

From there I walked on past a few shopkeepers who were all desperate to sell me something and the effort of having to say no again and again was great. That awful mixture of guilt and annoyance at not being able to take two steps without having to disappoint another shopkeeper. 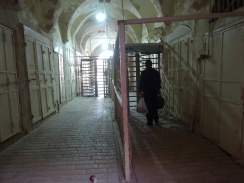 I finally arrived at the checkpoint leading to the Ibrahimi Mosque. The soldiers made me wait to go through, but caused me no problems. Again the few shopkeepers on the other side pestered me except for one who turned out to the son of a man I had got to know over the years. He spoke perfect English and told me he ran a travel agency in the West Bank and was doing OK. I then wanted to know more and got the details from him. 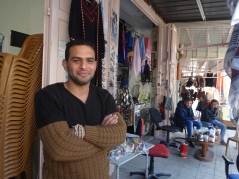 I really did not want to walk back the way I had come, despite disappointing Leila if I did not. I had been told that even Internationals were not allowed to walk down Shuhada Street, but the shopkeeper encouraged me to try and said I would be allowed to. So I approached the soldiers at the checkpoint and politely asked if I could. They seemed surprised that I just wanted to go back into H1 (Palestinian Authority Hebron) from H2, the Israeli controlled part, but seemed happy for me to do so and even took a photo of me with one of them.

of Shuhada Street. It felt a bit like one of those Westerns where the town street is deserted, but there are eyes watching you and a gun could appear around any corner! I am sure I was quite safe (relatively speaking that is), but it felt like a long walk back to checkpoint 56 and through the now very daunting 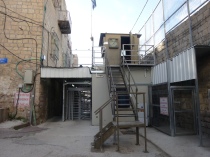 structure that Israel has created there. 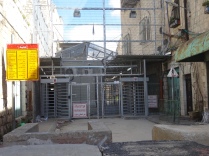 Here are photos of both sides of it.

Then I caught a shared taxi back to the part of Hebron where I am staying.