Buildings, Demolitions and life in the South Hebron Hills

You will hear a lot about Hamed on this blog. he is an incredible man with apparently boundless energy and passion in working towards the well being of anyone he sees in need. He is Director of the Hebron International Resources Network, activist in the Villages Group and part of  UN human rights violations team in the southern West Bank.

I was met in Hebron by Hamed’s wife and spent some time with his family over coffee.

A very depressing picture is emerging – each year more so. Hamed says he tries to work on the micro level, trying to improve the lives of the Palestinians by building schools, providing solar power and wood as fuel, rather than working on the macro level to try to change things as he has no hope politically of changing anything.

Where schools and other buildings and even electricity is concerned, everything has to be achieved without planning permission, because it is impossible to gain that without a Master Plan agreed with Israel, but even where one has been started and all legal routes are used, all that is achieved is a

delay for the inevitable demolitions. 2 schools have been demolished by Israel in the past few weeks.

Existing mixed school with a demolition order on a new section of it.

We visited sites in the South Hebron Hills, Area C, where 2 new schools are being built. In both cases planning  permission has not even been applied for so that attention is not drawn to the new structures. It is safer not to ask .

This school needs improved sanitation for the girls

education as they get too old to share all facilities with the boys.

In one of the villages, an existing school has a small extension that now has a demolition order on it and such orders can apply to any improvements at all, even the construction of sanitation.

Israel accepts and acknowledges Palestinians villages and provides building permits on just 1% of Area C land. Area C constitutes over 60% of the West Bank, which is all part of Palestine. New settlements and their outposts are springing up all over the place, while the pace of Palestinian demolitions continues to grow. If structures are paid for out of EU funds then they are demolished even sooner as Israel is fed up with the EU. I asked Hamed if statements coming from the EU made things worse for ordinary Palestinians and he said that the structures would be demolished anyway. It just happens faster if Israel is condemned in any way. It is better that Israel’s flouting of international law at least goes on record.

As we travelled around, we passed many roadblocks and some obstructions completely 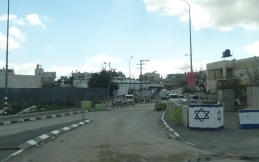 Difficult to see clearly, but the road block in this photo leads to a Palestinians village.

closing Palestinian roads off and isolating the villages. This too is more frequent and used to collectively punish the villages when any members of the village have been, or are suspected to have been, involved with violence or even demonstrations.

Before we left, Hamed’s mother  told me that she has no trust in the PA at all and say they are corrupt and that they work for Israel. Hamed comes from a huge family and many of them have experienced Administrative Detention for long periods and even torture. Several of the family homes have been demolished as punishment and she has no real hope of things improving. Because of the way Hamas is perceived there is no real hope of a unity government, as Israel, the USA, UK and others refuse to work with them and with the PA if they try to work together. But those same countries refuse to work with the PA on its own as they do not represent all Palestinians. Catch 22! And the PA, at any rate, are considered useless by most Palestinians.

We learned of yet another death. This time of a Palestinian woman 34 years old with 4 children whose husband works as a builder inside Israel. She was shot at a roundabout apparently trying to run over Israeli soldiers and a knife was found in her car!   The photo of her car shows the windscreen riddled with bullets. Even if there was any truth at all in it, why were so many bullets necessary to stop her car? Why not just blow out the tyres? So many accusations against ordinary Palestinians. The security camera footage was not working and there is no proof of anything except for a dead body and a grieving family. It is unlikely we will ever know the truth.