From Jerusalem to Nablus – 3rd March

Posted on March 2, 2016 by Miranda Pinch
I have noticed over the years that those who want to discredit Palestinians either show pockets of Palestinian affluence as proof that they are actually doing rather well under Israeli occupation or, where there are areas of real deprivation, that Palestinians live very simply and that Israel will be a good example to them of sophisticated modern living. Both choose to ignore both Palestinian capabilities and culture as well as the fact that living simply is not the same as deprivation and squalor and that even the most isolated Palestinian villages have as much right, more right, than the illegal settlers on Palestinian land.
To get To Ramallah, the bus had to pass through the infamous Qalandia checkpoint. Rarely a problem leaving Greater Jerusalem, as Israel likes to call it, but normally dreadful for Palestinians entering East Jerusalem and even for some Internationals as I have witnessed. 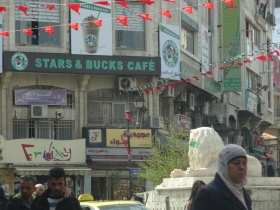 On the way  we passed examples of both deprivation and affluence.

Ramallah is like any vibrant modern city and I was interesting to see that many international companies still refuse to open up branches in Palestine.  Ramallah’s main roundabout boasts a well situated cafe called Stars and Bucks and a little further up the road I could see La Costa.

I met my friend Manar who works for the UN situated in Ramallah and she then drove me to Nablus where she lives with her husband and two young children.

My journey with Manar was particularly interesting as she told me about the latest challenges to ordinary Palestinians. She explained that news items about those killed by Israeli soldiers, suspected of committing violent crimes in East Jerusalem and the West Bank need to be understood by looking for certain clues.

I was aware that in the short time I had spent in Palestine at that time there had been 4 Palestinian deaths, all attributed to Israeli soldiers defending themselves. There are things we need to know in order to interpret what we are told in most cases, though there are always exceptions.

1. We know that Israeli soldiers are now allowed to shoot to kill if they feel threatened. Of course the important word in that statement is the word ‘feel’. As long as soldiers or settlers can claim that they felt threatened, they cannot be indicted for unauthorised killing. That now means in effect that any Palestinian can be shot at any time without any provocation or violent intent, just by having their actions misinterpreted either by mistake or on purpose. It has applied to Palestinians who have misunderstood Israeli instructions or who just happened to be in the wrong place at the wrong time.
2. Every incident, or at least the huge majority of them, are caught on security cameras, because they are everywhere – at every checkpoint, on buildings, street corners, petrol stations etc. If the Palestinian killed was shown to be guilty through the film footage, then Israel quickly releases it as proof. Where there is no evidence that any violent intent was meant by the Palestinian, the footage is quickly taken away by Israel and no proof is forthcoming.
3. The bodies of those who are guilty are not returned. When bodies are returned quickly as in a recent cases, then it is usually because the Palestinians were innocent.

An example of a body quickly returned features in the link below. The funeral took place shortly before I arrived in Ramallah. The two soldiers did not enter the camp by mistake, as reported elsewhere, but were in fact undercover IOF soldiers who were recognised and briefly held captive. At least 25 other Palestinians were critically injured. No security camera footage has been forthcoming. 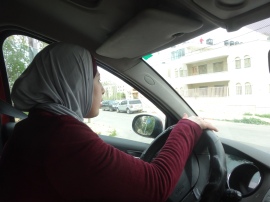 As we drove, Manar told me that since last October, things have become much more dangerous for ordinary Palestinians like her just going about their daily activities of dropping children off at kindergarten, travelling to work or visiting relations. Anything can now trigger an Israeli attack. A nervous driver who gets something wrong, someone with a shiny item that might be a knife, being too near a demonstration or even walking the wrong way or looking odd to the Israeli soldiers. Anything can now prove fatal. She told me that she has never felt so afraid before and although she feels safer in the heart of Nablus, than anywhere else, even there, there are Israeli incursions and nowhere is entirely safe.
Like