The Plight of the Bedouin – in Israel and the West Bank

“Keep talking and negotiating until there is nothing left to talk about, as all the land will have been swallowed up.”

I had the privilege on Wednesday 8th March, to be part of a group visiting the Israeli Bedouin vill

age of Umm Al Hiran, led by Rabbi Arik Ascherman, who told us the terrible story of this village through his own experience. We also met the elders of t

he village and heard their story with Arik as interpreter.

Arik writes a regular blog spot for the Times of Israel and much that he told us is included in his blog : Eyewitness Account of the Preventable Umm Al Hiran Tragedy. http://blogs.timesofisrael.com/eyewitness-account-of-the-preventable-umm-al-hiran-tragedy/

I  also include a link to a previous blog entitled: Will Israel evict hundred year old Israeli because he isn’t Jewish? http://blogs.timesofisrael.com/will-israel-ev
ict-hundred-year-old-israeli-because-he-isnt-jewish/

To cut a long and very tragic story short:

The Bedouin living in the Negev both within Israel and in the West Bank are not at all what most people imagine. They are not like nomads who rove around setting up temporary camps where they can find fresh grazing, but without owning land or settling down in one place. These are herdsmen and depend on their grazing areas, but they own the land including the grazing areas. Some have lived on a particular piece of land for generations, while others have been moved onto new areas by Israel when they were expelled from their lands in 1956. Some have ownership papers for the land, others either have written or verbal promises from the Israeli authorities or have owned the land under Bedouin rules for generations, which do not conform to modern land ownership documents. 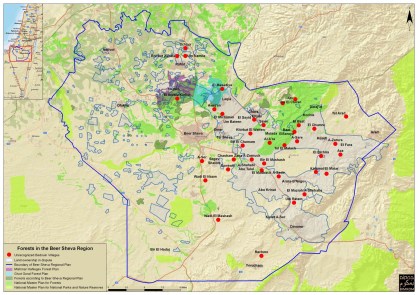 Today, 70,000 Arab Bedouin citizens live in 35 villages that the State of Israel considers “unrecognized” and the inhabitants “trespassers on State land,” so it denies these citizens access to State infrastructure like water, electricity, sewage, education, health care and roads. The State deliberately withholds basic services from these villages to “encourage” the Arab Bedouin citizens to give up their ancestral land or the land promised to them.

On 24 June 2013, the Israeli Knesset approved the discriminatory Prawer-Begin Bill, with 43 votes for and 40 votes against, for the mass expulsion of the Arab Bedouin community in the Negev. If fully implemented, the Prawer-Begin Plan will result in the destruction of the  35 “unrecognized”Arab Bedouin villages,

Over the last few years the names of some of these villages have become well known. Apart from Umm Al Hiran, there is also Al-Araqib, which has the notoriety of having been demolished 110 times at the time of writing this blog. http://www.palestinechronicle.com/israeli-forces-demolish-bedouin-village-of-al-araqib-for-110th-time/

What is important is that these Bedouin are Israeli citizens and, in the case of Umm Al Hiran, they are professionals who are well educated and employed within Israel and include a teacher, a lawyer and one of Israel’s top chemical engineers. Three of their nephews are doctors. So these are people who are productive within and for Israel, yet are deprived of all the usual rights of citizenship. And they pay their taxes to Israel, except for land tax because, as far as Israel is concerned , they have no land. . 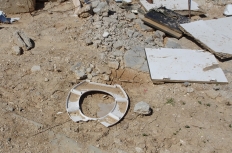 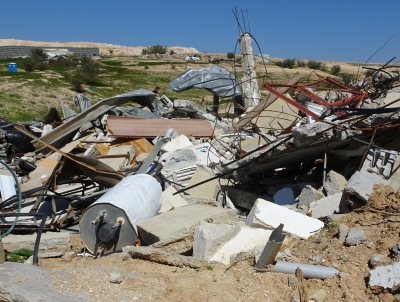 These photos show the remains of some of the demolished homes. You can see a western style toilet seat, a satellite dish and an air conditioning unit. The homes were modern, though without mains electricity, which was self generated through solar panels; without proper running water, supplied through a hose expensively from Israel and frequently cut off by the Israeli authorities; without garbage collection or a proper road.

Another, perhaps even more important point is that the residents of this village offered to become a neighbourhood of the new settlement that Israel wants to build on their land. Unfortunately such settlements can choose who lives within them and the authorities told the Bedouin that they would be refused. In other words, the Bedouin were being moved off the land given to them by Israel in order to build a Jewish only town on their land. I don’t know what word you would use to describe such a situation, but racial segregation comes to mind, if not Apartheid. It is certainly not any normal idea of a democracy.

What Israel wants is for these people to go to live in one of the newly created recognised Bedouin towns. The problem is that there is no way that they can continue the lifestyle that is theirs and there are few jobs or means of making a living once they have moved. They are given a plot of land and a lot of promises. The plot of land is real – just half a donum (roughly 4 donums to an acre), so about a quarter of an acre – but the promises are rarely fulfilled.

Those promises include compensation and all services such as mains water, electricity, health care. etc. So many of those who move, end up living in little more than a shanty town with no facilities; their animals, if they

take them, in overcrowded pens with no grazing.  The result is often drink, drugs and litter, which Israel uses against them, suggesting that their lifestyle is primitive and squalid to create more prejudice against them. There are some who can afford to build proper houses and some who do receive compensation, but they too have given up land and a way of life to receive them. 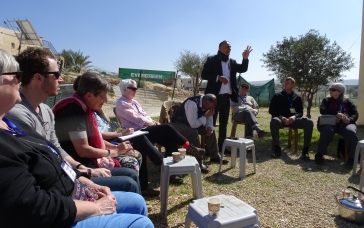 In the last three years, Israel has demolished around 1,000 Bedouin homes a year. While we were in Umm Al Hiran,  Salim from the local committee told us that the Israeli government had placed them on that land 62 years ago and now simply want to replace an Arab community with a Jewish one. The have lost all trust in the Israeli government and the children live in daily fear of further demolitions.

These villagers have never been violent even when the bulldozers came to destroy their homes. They have now received a half-hearted apology for the way the violence of the early morning demolition of Wednesday 18th January was reported. Unfortunately we all know how difficult it is to put false information back into the box. I remember that when I wrote to my MP about the situation, his very first comment in reply referred to the ‘violence’. In this case, the suggestion made was that the villagers had reacted violently, when the very act of destroying people’s homes for purely racial reasons is violence, not to mention that the subsequent death of an Israeli policeman was caused entirely by the Israeli forces shooting at an innocent village driver, who lost control and hit a group of Israeli police, killing one. The driver was left to die without medical aid and was immediately branded a violent terrorist. His body was then held onto by Israel until his family went to the Israeli High Court to get his body back for burial.

At the time of the incident, instead of pulling back, the Israeli forces continued to demolish homes. It looked to all intents as if the Israeli police were trying to bury the evidence. Afterwards 30 people were left without homes. It was windy and raining when the villagers tried to put up tents, so shipping containers were brought in, but the police forced their removal.

There are Israeli settlers living in the woods close by, waiting to move in and take over the village land, as soon as, and maybe before, the houses are demolished through ‘legal’ means. If the Bedouin were allowed to retain all the land they claim, it would amount to just 5.3% of the whole Negev.

Not only does Israel demolish Bedouin homes, it bulldozes Bedouin crops, usually as they near time of harvest, or cut down their olive trees and fruit trees. In fact Israel does everything it can to make life for the Bedouin so wretched they they will, hopefully, leave their land of their own accord.

Everything I have said about the Bedouin in Israel applies to the Bedouin in the occupied West Bank. There are names that have become notorious there as well.  Susyia, Umm Al Kher,  Khan Al Ahmar, to name but three. I have stayed on Friday nights in Susyia when I was an EA in 2009. The start of the Sabbath was the time the Israeli settlers would attack the village –  tents burnt, trees uprooted, animals killed, stolen or poisoned. More recently Susyia has had similar threats of annihilation as Umm Al Hiran and Al Ariqib. I have also visited Umm Al Kher a number of times. Their village has been divided by a settler road and the settlement of Karmel literally built right up to their homes. The settlers have even gone to the Israeli courts claiming the village bread oven smelled and polluted their air! So Israel put a demolition order on it. I can remember the settlers stealing the few chickens they had and the power lines for the settlement stretched right above them, while even their solar panels were confiscated and their meagre hose piped water supply turned off; water that actually belong to them.

So what is the difference? Superficially none, but under International Law quite a lot. The Bedouin in Israel are internal to land accepted as belonging to the State of Israel. Their plight is therefore an internal matter to Israel. Their treatment should be treated in much the same way that the persecution of minorities  is treated in other countries. Representations and even sanctions might be in order, certainly condemnation and pressure. The Bedouin in the West Bank are living under occupation. There are international laws that should be protecting them from forced transfer by Israel and also the settlement of their land by the occupying country. In fact there is an imperative on other countries to try to protect these people. The fact that Britain does nothing more than express concern or occasional verbal condemnation in regard to the Bedouin in the West Bank is tantamount to being complicit in their plight. The plight of these people along with all other Palestinians currently suffering under Israeli oppression and dispossession is very much the responsibility of Britain as I have explained in my previous Blog Post: Banksy, Balfour and Bethlehem.